He was a representative painter of the Rin school in Kyoto and Edo (Tokyo) from the latter half of the 17th century to the 18th century. He incorporated a novel composition and screen development into the Yamato-e-like depiction that makes you feel an elegant and graceful tradition (classical), and established a unique style that is clear, decorative, and innovative. Its highly innovative and unique style sets it apart from the Kano school, which was the largest school at the time, and is still highly regarded as one of the largest painters of the Rin school. He learned a method of paintings of Sotatsu , considering from what the replica of ” Wind God and Thunder God Figure folding screen ” that Korin worked Sotatsu’s masterpiece was left, although there was no direct teacher-student relationship with Sotatsu Tawaraya who was a master of the beginning of Edo period. In addition to folding screen paintings, it is obvious that Korin worked on sachets, folding fans, uchiwa, kosode, lacquer work, and ink painting in his later years, and his lifelong productions are diverse.

A masterpiece, the national treasure “Irises Screen”, which is said to have been created by Korin Ogata, one of the greatest masters of the Rinpa school, in his early 40s (the theory that he is around 44 to 45 years old is considered to be promising). This work depicts the scene of the 9th stage “Yatsuhashi” of one of the most famous Japanese song stories “Ise Monogatari (author unknown)”, which was established in the Heian period. Korin often used this swallow flower throughout his life. It is known that he was working on a design work, but it is also famous as the most representative work among them. According to the story of Ise, Yatsuhashi in Mikawa Province (currently near Yatsuhashi-cho, Chiryu City, Aichi Prefecture.) It was named “Yatsuhashi” because it passed eight bridges and the water flows like a spider’s hand. It is written that the Japanese iris bloomed beautifully on the banks of the swamp, but in this work, the scene of “Yatsuhashi” was depicted with the main point only on the beautifully blooming Japanese iris. The light and refreshing colors of ultramarine blue (the flower part of the iris flower) and green blue (the stem grass part of the iris flower) that flourish on the gold ground, and the rhythmically arranged group of iris flowers that seem to play a pleasant melody on the screen. And the beauty of the compositional contrast between the left and right iris flowers is just eye-catching to the viewer. Even though it is flat, the infinite expanse of space and the sense of depth in the margin of gold, which stands out because of the simple composition of only the swallow flowers without the bridge, is the world view of beauty that can only be achieved by Korin. The use of paper patterns has also been pointed out for the (almost similar) similarity in shape of each bundle of iris flowers. About 10 years after working on this work, Korin produced ” Yatsuhashi Folding Screen ” with the same theme 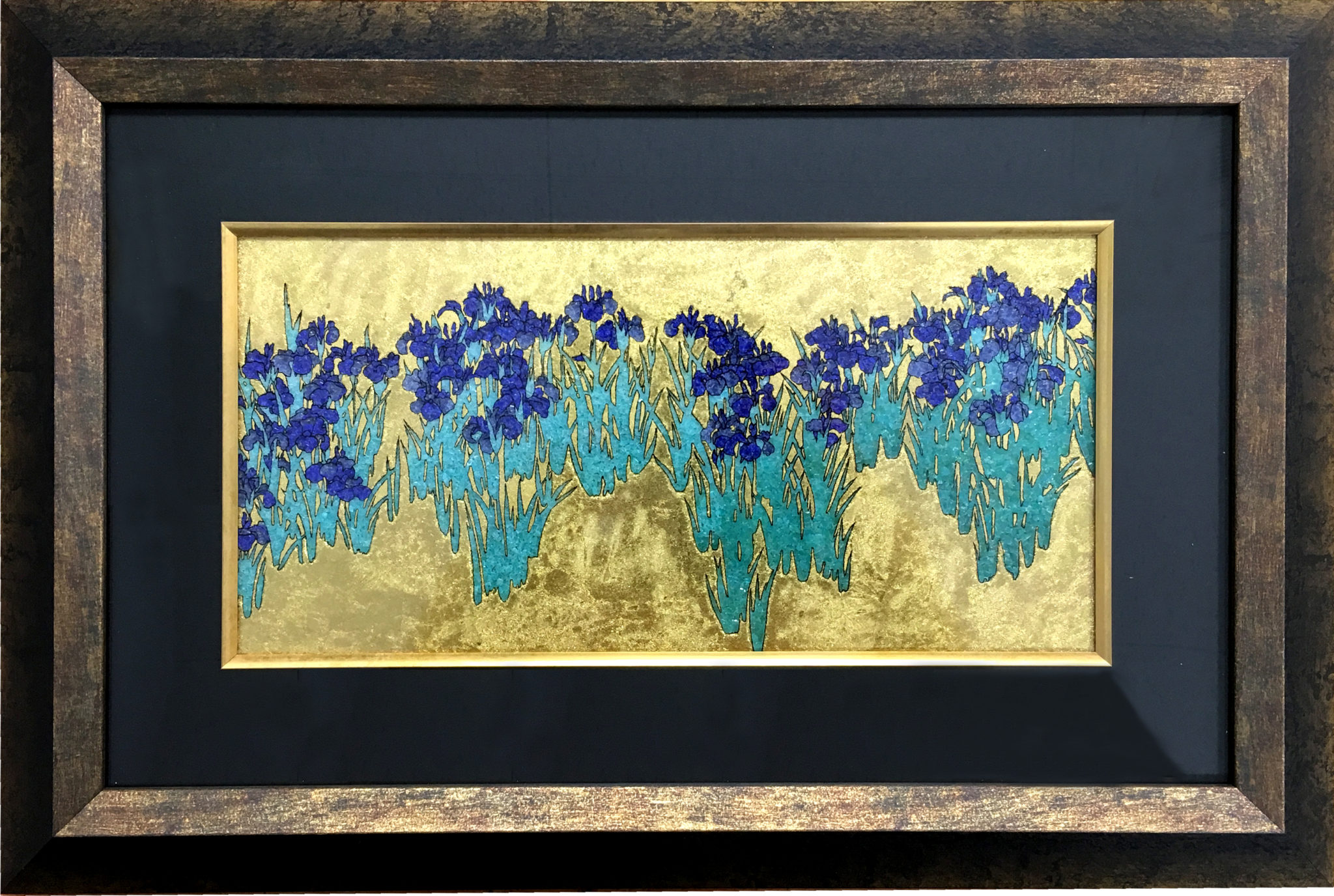 The national treasure “Red and White Plum Blossom”, a masterpiece by Ogata Korin, one of the most famous painters in the Rinpa school, in his later years. The folding screen, which is considered to be the masterpiece of Rinpa art, depicts two plum trees with red and white plum blossoms and a stream of water flowing from the top to the bottom of the screen, and Korin was devoted to the style of Sotatsu Tawaraya. It is known that this work was also strongly conscious of the contrast of Sotatsu ‘s ” Wind God and Thunder God Folding Screen ” (* Korin himself was a copy of ” Wind God and Thunder God Folding Screen ” (reference) left). According to the research and investigation of “Red and White Plum Blossoms” commissioned by the MOA Museum of Art in 2003 and conducted by the National Research Institute for Cultural Properties, Tokyo, the gold leaf that occupies most of this work is covered with gold leaf, which was the original theory. Rather, it was concluded that the gold leaf was imitated using gold mud and the foil feet (the part where the gold leaf overlaps) were added, which had a great impact on researchers and painters (however, this theory). There are still many objections and denials, and further research and research is expected in the future). It was used as a very simplified expression of plum blossoms consisting only of contours and petals, which was called Korinume and was popular afterwards, and as a realistic expression method of plum tree trunks. The technique has a noble and majestic beauty as one of the goals of the highly decorative Rinpa art of Korin. In addition, it was thought that silver foil was used for the unique water flow part that was bent into an S shape called Korinnami and was designed in a spiral pattern, but a 2003 survey used a paper pattern (probably black indigo). It is also noteworthy that it was concluded that it was drawn with an organic colorant. Regarding the interpretation of this work, the light of the gold ground and the darkness of the water flow, the stillness of the aged white plum tree and the movement of the youthful red plum tree, the trunk part of the plum tree and the stylized water flow part that make you feel realistic. Since many contrasts are recognized, various theories have been advocated, such as the theory of interpreting Korin and his younger brother, Kenzan, and the theory of Korin and Nakamura Korin (supporter of Korin). 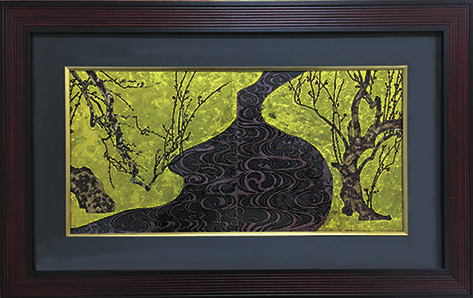